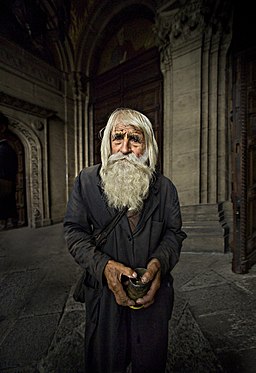 In Bulgarian, his name translates as “kind”


Dobri Dimitrov Dobrev, was born July 20, 1914 in the village of Bailovo, Bulgaria. He is better known as Grandpa Dobri, or The Saint of Bailovo. He is a Bulgarian beggar who wants to change the world..

Dobri’s father died while serving in World War I, this left his mother to raise him and three sisters alone. His mother worked at an orphanage, and his father before joining the war, would often help the orphanage when they had no money. Dobri saw sacrificial kindness in the lives of his parents from a young age.

Dobri served as a bodyguard to King Boris III and his family. A brush with death was a defining moment for Dobri, he believed God had a plan for his life. He retired the Kings service and devoted his life to serving God, believing it was divine intervention.

Dobri married near the rise of World War II, they had four children together, two have passed on. He served in the war pledging to protect Jewish citizens, and lost most his hearing after a bomb attack. He survived over forty years of the Iron curtain, by going into the mountains to pray. Working as a shepherd, he learned to be a humble servant, and had no desire for material wealth. He gave all his belongings to the Orthodox church, and now lives in a small room at Saints Cyril church in his native village of Bailovo.

In his tattered cloths, and worn leather sandals, he would walk in all-weather over 40 kilometers, to beg alms. You would think Dobri was merely a common beggar, but not so.. Standing outside the church of Sofia, clutching a small tin box, he raises funds for churches and orphans.

In his lifetime, Dobrev has given 80,000 Bulgarian lev ( $50,000 USD) to churches, monasteries and other charitable causes. Dobri chose a simple life, never seeking praise for his giving. He is loved by many in the village of Sofia, who call him “Grandpa Dobri”. Dobri has never taken a cent of the charity he has raised. He lives on 100 euro’s a month that he receives for retirement, and thankful for the fruit and bread people kindly leave him.  At 101 his strength endures, since a merry heart is like a medicine.

He enjoys visiting with those who pass by, and will often kiss the hand of little children, or those in his company. He always reminds those who will listen about God’s love, and that ” He is the only way”. This gentle old man touches the heart of all who encounter him. His life story inspired the documentary film ” The Silent Angel ” and also a website dedicated to his life’s work  Saint Dobry.

Although Dobri may be unaware, his kindness has been ” Tweeted”..  Matthew 23:12, declares that those who exalt themselves will be humbled, but those who are humble will be exalted. I believe Dobri is now being exalted for his steadfast love..

So if you ever chance to meet Dobri Dobrev, standing outside the St. Alexander Nevsky church of Sofia, please give him a big hug for me!

The good will is just and true. Everything in it is good. We must not lie, nor steal, nor commit adultery. We must love each other as God loves us.
— Dobri Dobrev

5 thoughts on “Who Is Dobri Dobrev? Come And See!”